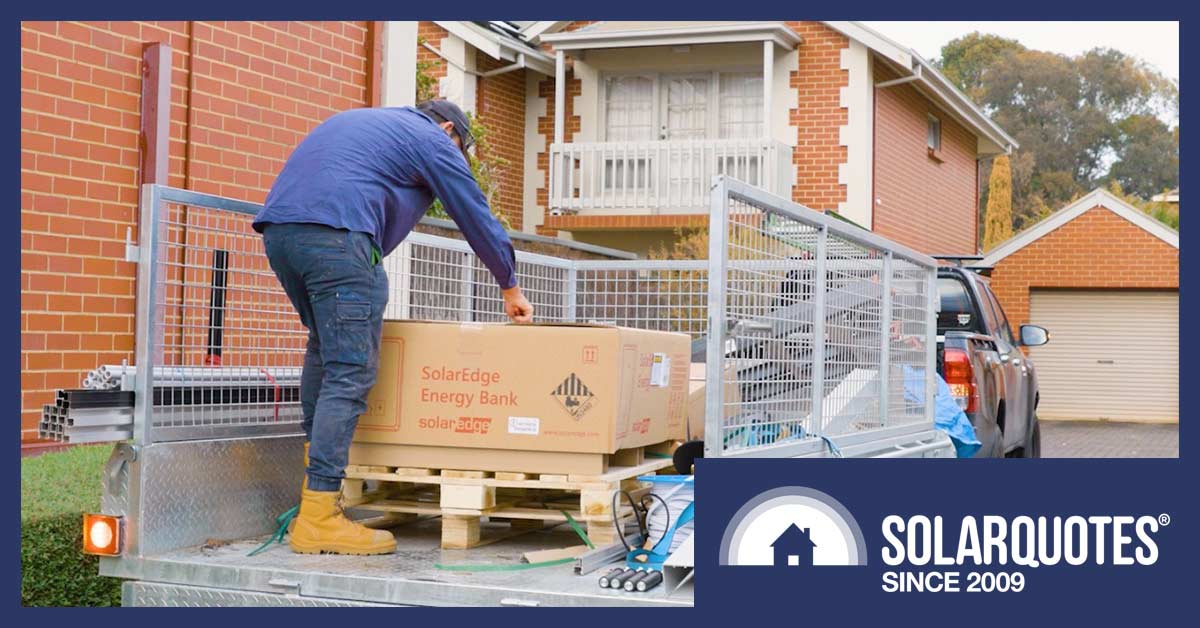 Two years ago, I had a 6.6kW SolarEdge/Seraphim solar system installed on my house in Adelaide. A few months ago I decided to join the increasingly-less-exclusive club of home battery owners.

So I called back my original solar installer, and got them to add a spiffy SolarEdge Home Battery to my house. Three months on, it’s time to write about my installation experience, initial impressions, and bumps along the way.

Why The SolarEdge Home Battery?

Finn has a Tesla Powerwall and has extensively written about it, so he encouraged1 me to get a less common battery.

The SolarEdge Battery was only released in Australia 6 months ago (I believe mine was the second installed in Adelaide). For a while it was known as the ‘SolarEdge Energy Bank’, but SolarEdge Australia has since reverted to the imaginative ‘SolarEdge Home Battery’ moniker.

And SolarEdge was (and, I believe, still is) offering to upgrade older SolarEdge inverters (like my 5 kW HD Wave) to the new hybrid ‘Energy Hub’ inverter for free when you buy the SolarEdge Battery. The battery can store 9.7 kWh of energy. Over the last two years my average daily usage topped out at 13 kWh in winter – meaning 9.7 kWh of storage was the sweet spot of price and size for my situation.

I Got My Original Solar Installer To Come Back

Using the same installer who did your solar power system installation for a battery retrofit is not mandatory. But I decided to invite back my solar installer from two years ago – SEM Group.

This was because I wanted to keep all warranties under one roof. It makes things easier if I have any issues in the future. Plus – they did a fantastic job with my solar installation, so there was no reason not to invite them back! 130 kg of battery goodness. And a pair of strong dudes.

The Battery Installation Was Smooth As Butter

It took the better part of a day for a two-person team to swap out my inverter and install the battery. Cables in the cavity for neatness. The naked battery – without its cover.

They were prompt, efficient and left me with a neat install – one whose aesthetics are worthy of a SolarEdge product brochure: Wiring the switchboard (bottom) to the backup-box (top). The ‘ES’ sticker was added to the switchboard after this shot!

One comment I will make about the installation – the final commissioning took ages (almost two hours). If I knew it would take ages, I would have ducked out for lunch instead of twiddling my thumbs at home. Commissioning took hours. But to be fair this was only the second SolarEdge home battery installed in South Australia.

During commissioning, I was asked, “What percentage do you want to set the minimum battery reserve?” To the non-techies, this means, “What amount of energy do you want to keep exclusively for blackout situations?”

I had to think about this one. The more I kept in reserve for blackouts, the less I’d use my battery every day – hurting my payback. But if I set it low, or even at 0%, I could be facing a situation where a blackout hit, and the battery was flat – leaving me with egg on my face.

I took a middle-ground option and had it set at 25% – keeping 2.5 kWh in reserve for use in a blackout.

After a few weeks of checking my monitoring, I realised I’d rather fully discharge the battery and stomach the embarrassment of having a flat battery if the stars aligned against me. The lost savings from having a reserve was gnawing away at me.

I couldn’t change this setting through my app – so a quick email to SolarEdge support had them do it for me.

It Wasn’t All Smiles And Sunshine

Three days after the installers packed up and left, my battery also decided to. Through diligent monitoring of the SolarEdge app, I noticed the battery was stuck on 35% state of charge: A quick phone call to my installer got them back out the next day to try to diagnose and fix the problem. As it turns out, the battery was bricked and needed replacing. To make things worse, SolarEdge was quoting 3+ weeks for replacement under warranty.

But luckily – and this is why it’s so important to choose a good installer – SEM bought a new battery out of pocket and got it to me within the week.

It only took a few hours for them to replace the battery and get it re-commissioned. Meaning I could go back to showing off my fancy new SolarEdge Home Battery to my friends.

How Has The Battery Performed So Far?

Before buying, I confirmed with the installer my SolarEdge Home Battery would be able to provide what Finn calls “apocalypse proof” backup – which is when the battery will charge from the solar panels even if the grid is down.

It can put out 5kW of power – which is more than my house has ever used, even with two aircons on at the same time. So I’ve rarely had to draw from the grid on top of my battery.

My typical daily usage is approximately 7kWh in summer and 13 kWh in winter. So having a 9.7kWh battery means I’ve almost never completely drained it, except when I’ve had a run of overcast winter days.

One quirk of the SolarEdge Home Battery’s backup is it takes a full 3 seconds to switch over in the event of a grid outage. Other batteries – like the ever-popular Telsa Powerwall – have instant switchover. SolarEdge claims this is a feature, not a bug, as it’ll be obvious when the power goes out.

As an avid PC gamer, a 3-second switchover isn’t ideal – but it’s better than none at all!

Finn was keen for me to join a Virtual Power Plant – or VPP – so I’d have an extra dimension of battery ownership to write about. My enthusiasm for joining one crashed when I saw the only VPP I was eligible for was Powershop’s.

In exchange for letting them hammer my shiny new battery, they’d pay me a whopping $10 per month.

As I was preparing to make the ultimate financial sacrifice for the SolarQuotes blog by signing up for Powershop’s crappy deal, Finn invited me to a meeting with the new Partnerships Manager for Amber Electric.

We’ve written about Amber previously – but for those who haven’t heard of them, they’re an energy retailer who passes through wholesale rates for electricity.

They’re close to launching their new “SmartShift” software to the public, and they were keen to get me to join the closed beta. It allows them to charge and discharge my battery – paying wholesale rates for electricity. This can be up to $15 per kWh exported!

On one particularly good day (or bad day, if you were an Amber customer but didn’t have solar or a battery), I earned $97 in credits for discharging my battery to the grid: I’ll Be Damned – 3 Second Blackout Switchover *Is* A Feature!

I live in a strata townhouse complex, so the main switchboard isn’t in my house – it’s in a big cabinet in the shared driveway area. Coincidentally or not, since my SolarEdge Home Battery was installed, the mains breaker has tripped several times.

It’s obvious when this happens – because the power goes out for a full 3 seconds before the battery kicks in. So I’ve had to pay a visit to the main switchboard several times to flip the breaker back on.

A week ago, this happened at 4 am. I noticed because the white noise machine I sleep with turned off and back on, waking me up. Also, I have a one-year-old, so my sleep isn’t the best anyway.

Usually I’d be in no rush to flip the grid back on – I don’t sleep with my aircon on, so I could easily go overnight with little energy. But because I’m part of Amber Electric’s “SmartShift” closed beta – a weary check of the app showed a wholesale price spike was expected for 6 am.

My battery was only 30% charged, and at 4 am, electricity prices were cheap. So if I didn’t flip the mains back on, my battery wouldn’t be able to charge up from cheap grid energy and then earn me some serious money by discharging at 6 am.

Telling myself it’d all be worth it when I checked my savings later in the day, I jumped out of bed in my pyjamas, out into the cold, to turn the grid back on.

Since joining Amber, I noticed when the battery was discharging to the grid, the indicated power output was almost doubling in my monitoring app: This could be buggy SolarEdge monitoring software, or Amber suggested the CT clamps could be set up incorrectly. I have notified my installer and am waiting on him to arrange a time to come out and inspect.

There were a few kinks along the way, some bigger than others, but with a brand new product coming from a company who hasn’t offered their own battery before – I wasn’t expecting things to go off without a hitch.

The SolarEdge Home Battery does everything I’d expect a battery to do, looks chic, and is compatible with Amber Electric’s SmartShift – significantly increasing my savings.

Would I recommend the SolarEdge Battery to a friend with a SolarEdge system? Absolutely.

(If you want to see a video of the installation, we’ll be releasing one in the next two weeks. Join the 20,000 subscribers to our SolarQuotes YouTube Channel to get notified when it’s released.)